Not a card... but a Magoo Pillow Sandwich 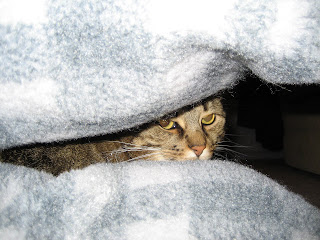 So Monday night I needed to take a break from my paper crafting to sew up a couple of kitty pillows for my cats. I don't put a lot of effort or money into making these because it only takes a few months for my cats to completely cover these things in hair. And yes, I have tried washing them... which was a huge mistake!!! Not only was there still a ton of cat hair on them, but the inside of my washing machine was coated with cat hair (yick)... that stuff has some mighty strong sticking power! 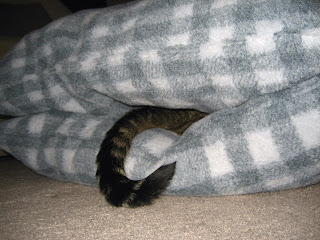 But I digress... back to the story... I was almost finished but needed to leave the room to hunt down some yarn and needles... and what happens in those few minutes? Magoo puts the moves on the pillows... squeezing between the two of them and creating a Magoo Pillow sandwich... he he he. I thought he was cute so took a couple of pictures to share with you! :) I especially like the tail sticking out... enjoy!
Posted by Danielle L. at 12:18 AM

Email ThisBlogThis!Share to TwitterShare to FacebookShare to Pinterest
Labels: Critters