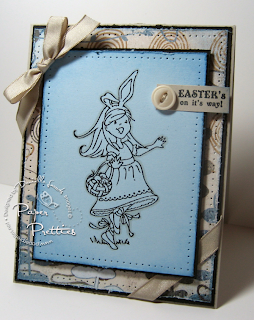 It's almost release day at Paper Pretties which means that I can share a sneak peek at one of the sets being released! Woot! I used Bunny Hop which was the February SOTMC image and is now being released to the public. She is just so darling!

Quick Notes: This time around in stead of coloring Sophia with Copic markers I stamped her in VersaMark on Bashful Blue cardstock and embossed with black embossing powder. I did outline her with a Copic marker to add a hint of shadow. The rest of the card was super quick and easy.

You can see more sneak peeks at the following Prettie Girl blogs:

Just a reminder! On Sunday March 1st, Paper Pretties will be having their monthly Stampin In Your Jammies party!! The party starts at 7PM (EST) and will last until 10pm. We will be issuing a challenge every hour so be sure to come and play along!! Besides the challenges, chatter, and all around fun, we will also be releasing Bunny Hop Sophia to the public as well as a new stamp set! Sneak peeks start on Friday, February 27th! Hope to see you there!

A new release means it is time for another CUTIE PIE CONTEST!!! All you have to do to enter is upload a card you have made using Paper Pretties stamps to the Cutie Pie Contest gallery over at the Paper Pretties website. Entries must be in by no later than 9PM (EST on February 28th to be considered for the prize. Besides getting to call yourself a CutiePie, you will also receive all the new stamps that are released on the 1st!! Good luck!!
Posted by Danielle L. at 8:00 AM