It is time for another crazy challenge and this week we are all about celebrating the seasons. This week’s challenge, depending on where you live, is to make a card/project that depicts the season where you are. You can find all the details on the challenge and more inspiration at Crazy 4 Challenges Blog. 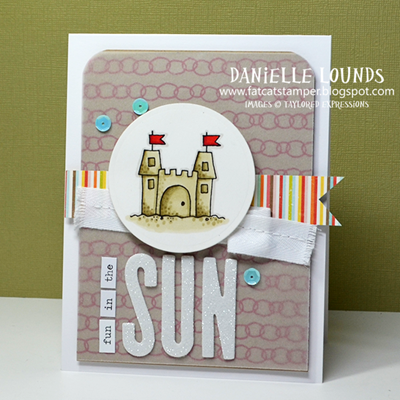 Since today it was over 80 degrees outside and very sunny I think Summer has finally arrived. And when I think of summer two thoughts come to mind… air conditioning and sandcastles. Since the first seemed a bit hard to convey I went with the second for my card.

I used the sandcastle from the recently released Mischief Maker at the Beach (one of my little drawings) for the main scene. It was colored with Copic markers and glittered with a Clear Wink of Stella Glitter Pen. 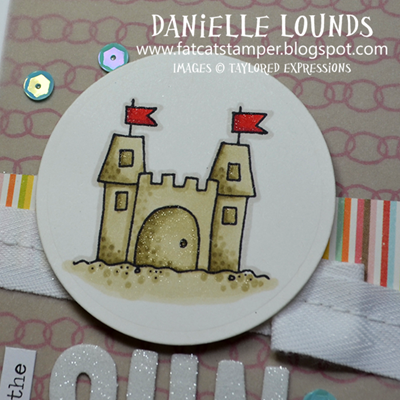 The background behind the main image and embellishments was created by stamping a border from Doodled Borders (another one of mine) in Memento Luxe Love Letter on kraft cardstock. It was a bit distracting as is, so I added a layer of vellum. Easy peasy way to tone done a background. I created a sentiment using letter and chit chat stickers. The letters were DIY Thickers that I covered with clear fine crystal glitter. I finished with a bit of designer paper, some twill ribbon, and a few sequins. 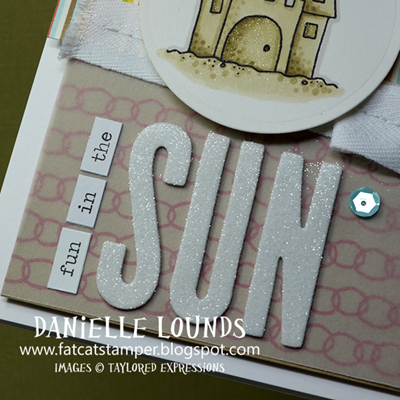 Hope you enjoyed my summery card. See you next week for another crazy challenge.

I have to admit that I’m a big fan of flower images. They are much ‘hardier’ than the real things. Lol. This Perfect Peony image from Wendi Vecchi just had to be added to my collection. It comes with a matching stencil but I didn’t use that on this card. 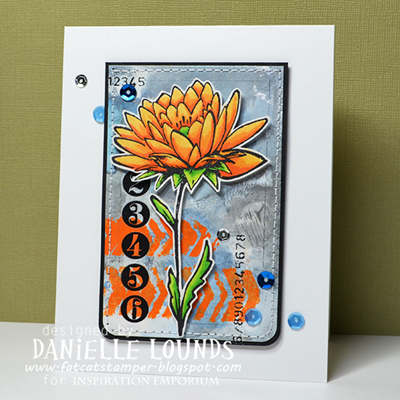 The flower was stamped on white cardstock and colored with Copic markers before being cut out. I added some shimmer using a Clear Wink of Stella Glitter pen. Behind the flower is an artsy panel that I created – here are some basic steps:

3. Layer on black cardstock, rounding a few corners first, and then add stitching.

4. Add a few remnant rubs here and there.

5. Attach the layers with foam tape and dots.

6. Finish by adding a few sequins here and there. 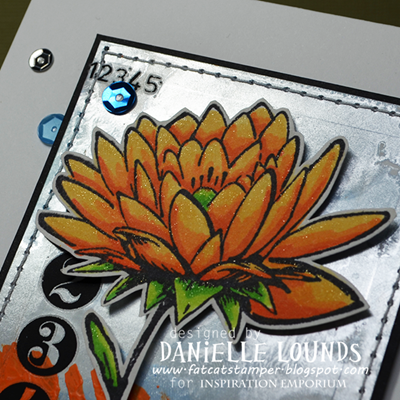 The silver alcohol ink has a ton of metallic shimmer that is delightful! 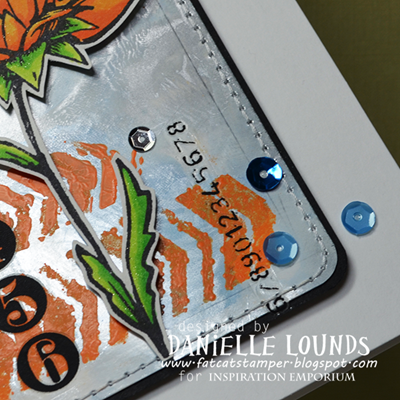 Hope you enjoyed today’s project. If you have any questions just let me know!

Hello! I’m here tonight with a super quick card. I used the new The Little Things a la Carte stamp from Taylored Expressions. 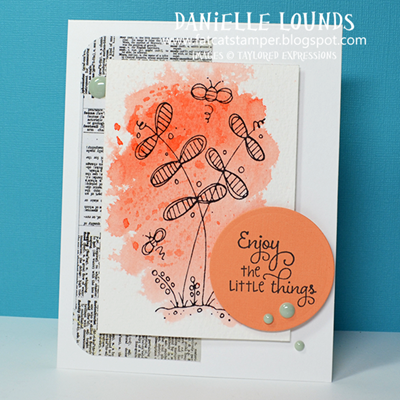 I decided that instead of coloring the image I would stamp it in black on water color paper and then use a Distress Ink Reinker, a paint brush, and a bit of water to create a wash of color. The coordinating sentiment was stamped on cardstock and then cut out with a circle die. A bit of designer paper and a few enamel dots and I was done. 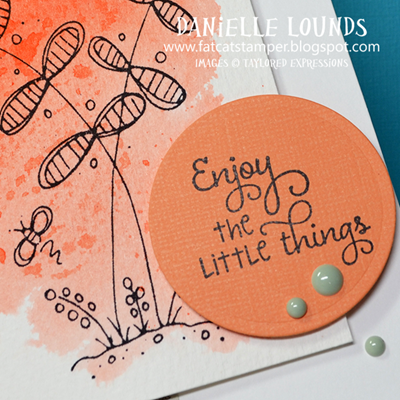 I’ve been a bit busy the last week so I’ve been neglecting my blog. Oh the pen and paper got quite the workout. :) Since it will be a while before I can share that work, how about a pretty card? 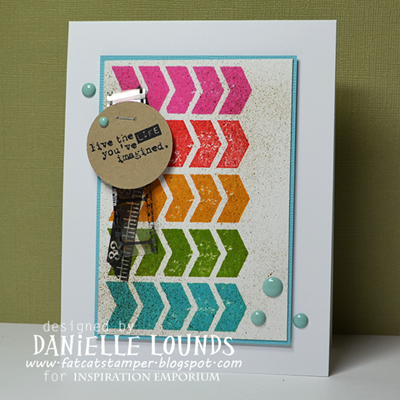 I’ve been playing with ink a lot lately and I used Archival Inks to create a rainbow background using an arrow image from CMS192 Here & There. After stamping the images on watercolor paper I spritzed the background using the Gathered Twigs Distress Marker.

I stamped a sentiment on kraft cardstock and cut out using a circle punch. I embellished with some tissue tape, film strip ribbon, and a few enamel dots. 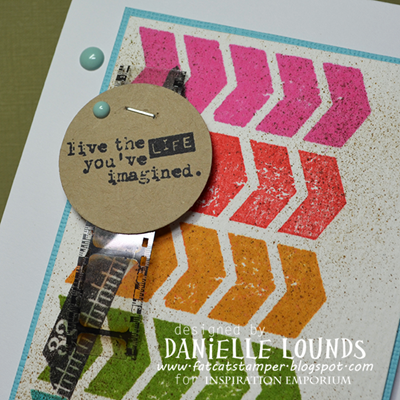 I thought it would be fun to share a few photos I’ve taken this last month using Instagram. Just for fun! If you are ever curious about what I’m snapping pictures of you can follow me there. I don’t post that often. 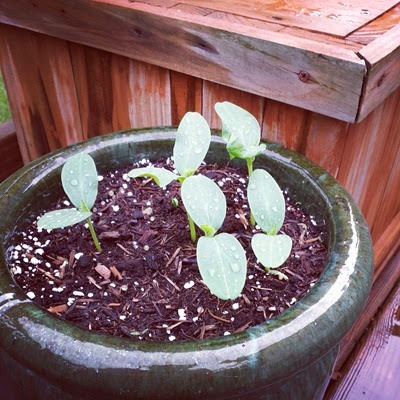 [Dad helping with yard work around my house. On Father’s Day weekend no less. I’m so mean.] 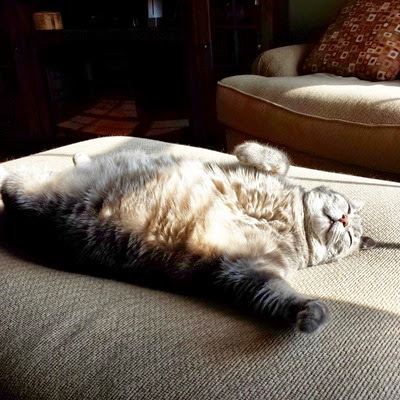 [Isa chillaxing in a ray of sunlight. Very lazy cat.] 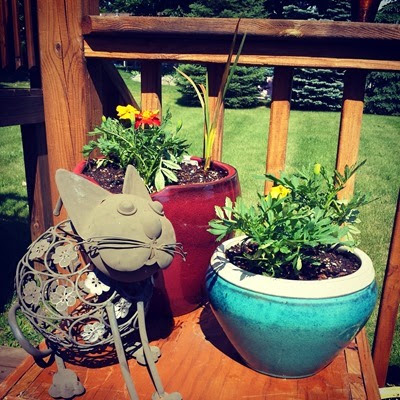 [Potted some flowers. My deck now has some color. Much nicer than a bunch of weeds from last year.]

InLinkz.com
Posted by Danielle L. at 9:50 PM No comments:

It is Saturday which means it is time for another crazy challenge. Since it is the third challenge of the month it is a sketch. 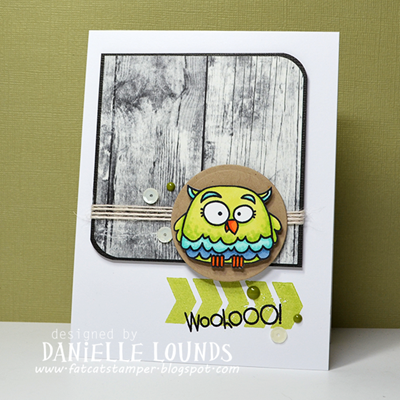 Here is the sketch and you can find more details on the challenge over at the Crazy For Challenges Blog (and some amazing samples). I will admit that my panels are a bit… off from the sketch but it is close enough. 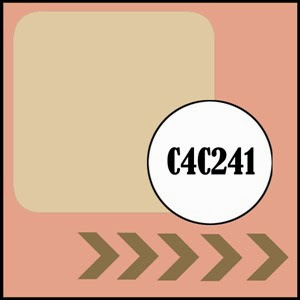 For my card I used two stamp sets: Chubby Chums from Paper Smooches and CMS192 Here & There from Stampers Anonymous. I colored the owl with Copics, touched up with a Clear Wink of Stella glitter pen, and then trimmed. I tried a new to me ink, Memento Luxe, to stamp the arrow in green (Pear Tart). Me likey. I did have to do a quick heat set before stamping the sentiment in Archival Jet Black ink but I love the coverage. The designer paper is Latest & Greatest from Authentique and I embellished with some enamel dots, sequins and jute string. 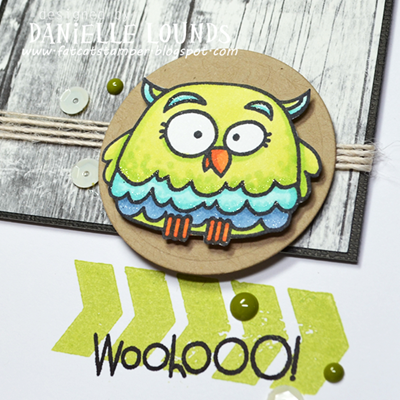 Hope you enjoyed my card! See you next week for another crazy challenge.