Hello! I’m excited for today, it is release day at Taylored Expressions and there are oodles of new stamps and dies now available for purchase. A handful of them were illustrated by me and I am excited to see what you make with them.

One of the new sets is the second addition to the Mischief Maker line: Mischief Maker – At the Beach. She was a delight to draw and was the concept idea for the line. I snuck her into a batch of rough sketches to see what Taylor thought and was incredibly happy with the positive response. 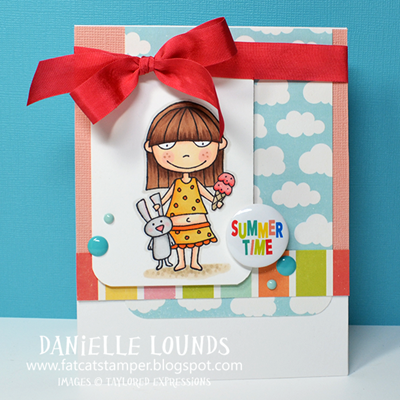 I used the set and Hello Summer (Echo Park) designer paper to create a fun summer card. The layout is from Retro Sketches #117. I colored the little girl with Copic Markers and added a bit of shimmer to the ice cream and bunny nose with the Wink of Stella Glitter Pen.

The ice cream cone is a separate image that I stamped on another piece of white cardstock, colored, and cut out. After gluing over the main image I stamped her hand a second time and colored and cut it out and glued it over the cone.

For embellishment I added a few enamel dots, seam binding, and a flair badge (Queen & Co.). 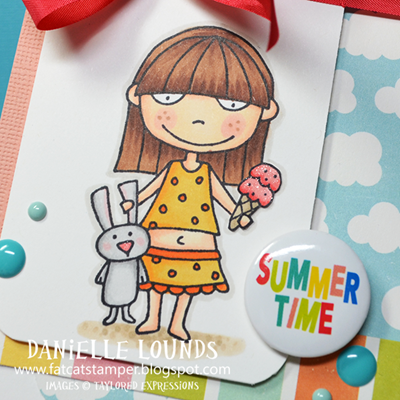 For my second card I used the new The Little Things stamp set. I stamped the image in black and used Liquid Frisket to mask portions of the image. I then used the Clouds Border Die to create a cloud template and sponged the background with Tumbled Glass Distress Ink. I removed the mask and colored the bees, spots, and ground with Copic markers. I stamped the image a second time and just colored the flower petals. I cut out each petal and adhered them to the first image. For a final touch I added glitter here and there using the Clear Wink of Stella Glitter Pen. 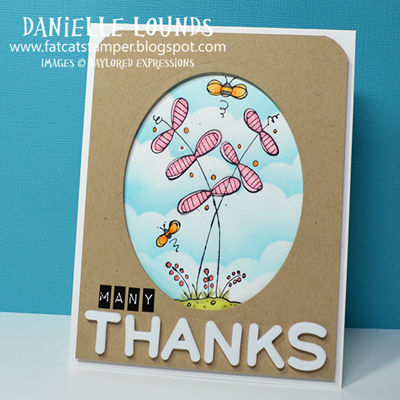 Next I cut a piece of kraft cardstock to size and then cut out an opening using an oval die cut.

I used Label Letters (Idea-ology) and Thickers to create a sentiment on the panel and finished by rounding the corners. 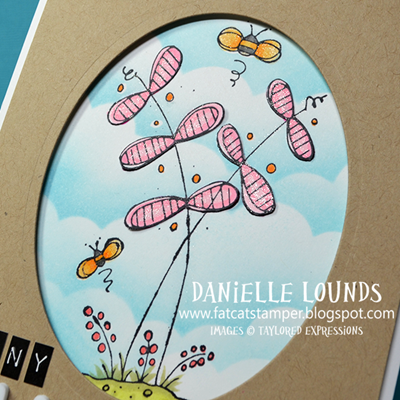 For more inspiration using the latest TE products check out these talented designers: